At the Earth Summit in Rio de Janeiro/Brazil in 1992 roughly 180 states signed the Agenda 21 pledging to work individually and collaboratively on the world’s most complex and urgent problems.

Rio 1992
The United Nations Conference on Environment and Development (UNCED) held in Rio de Janeiro in 1992 was one of the biggest and most influential event in man's history. It became the defining moment for a new outlook onto the world's affairs with deteriorating eco-systems, worsening poverty, hunger, malnutrition and bad health, illiteracy and a growing divide between the rich and the poor. 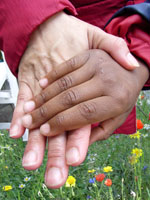 A major insight was that the current problems of the world wide growing poverty, the increasing damage of our eco-systems and with them of our basis of living are connected to the Western or industrial production systems and consumption patterns. Therefore, the former can only be solved in combination with the latter. Key to this is a global perspective on the ecological, social, and economic development of the world. People have to adopt a responsible way of life creating a chance for everybody to fulfil their basic needs and have access to a better living standard whilst at the same time protecting our eco-systems by sustainable management and granting a safer and more prosperous future for all.

The summit culminated in the Agenda 21, a long document divided up into four parts: social and economic dimensions, conservation and management of resources for development, strengthening the role of major groups, and means of implementation (altogether 40 chapters). 179 countries - Germany was one of them -  signed this the document and committed themselves to the implementation of this programme at their national, regional and local level and to participate in international projects on financial and technological transfer.

Links:
The Road to Rio
The Rio Declaration (on Environment and Development)

The Road to Rio